The IGP "Vin des Allobroges" takes its name from the territory of the Allobroges, Celtic people who had settled in the northern Alps in the early third century BC, and who extended from the Alpine mountains to the banks of the Rhone.
This people whose name means "those who come from elsewhere" has shaped the region and contributed in particular to the creation of a dense communications network that facilitate the export of local products, such as wine.

From the first century AD, Columella quoted the allobrogicum as a renowned wine, and Pline l’Ancien spoke of "vitis allobrogica" vine. Other ancient writers as Celse or Plutarque praised Allobroges wines with naturally waxed taste, popular in Rome, to which they ascribe qualities as well as medicinal taste. Throughout the territory vineyards were numerous and careful cultivation.
The unity of this "Province Savoie" has continued throughout history until its annexation to France in 1860.

Wine production of the PGI derives its specificity and continuity of constancy to the present, based on the choice of varieties adapted to the environment of massive pre-Alpine; where the vines can not be installed on selected sites to allow it to carry out the ripeness of the grapes. Thus, the grape varieties used by the PGI are often specific to the region and the wine growing areas pre-Alpine. These elements justify a confirmed and lasting reputation since the Roman period.

The harmony between freshness and fruity is the main characteristic of white wines. Sparkling and light, floral and mineral scents depending on grape varieties, these wines to the authentic rusticity that are a perfect expression of the land of Savoie.

The red wines are light, with fruity aromas that evoke the taste franc grapes. Enjoyed in their youth for one, they can also be red wines with character Savoie affirmed, structured and tannic, with very good aging potential, and whose Mondeuse is a perfect example.

When developed in rosé, this lightweight and lively wines are characterized by a nose of red fruits and have a fine and fresh character.

Sparkling wines of quality are based on the strong support and low alcohol white grapes that gives their freshness and lightness. The rating is fruitier when made from rosé wines.

More limited productions from over-ripe or raisined grapes (the passerillage very ancient custom in the Allobroges, allowed to taste the dehydrated grapes for Christmas) complete the product range. The wines made from it are higher in degree, rounder, more complex structure, with ample and persistent aromas. These productions are however irregular because very dependent on weather conditions.

Since ancient times, the expertise of the Allobroges offered the traveler a variety of products able to satisfy the tastes of curious taster. Since then, the reputation of its wines has grown. The wine country in recognition of Allobrogie by the INAO in 1976 marked a milestone in the collective history of that name in imposing its strong regional dimension.

The winemakers were able to use the ancestral knowledge of this area by adapting including many local grape varieties and restoring rare or forgotten grape varieties that are sometimes subject of a confidential but still very qualitative production. They have contributed to the emergence of a wide range of products (which together now represents over 5500 Hl) and work alongside the development of childcare facilities in the vineyard, further strengthening the reputation of their products.

These are all characteristics and consistency over time that are recognized by consumers today and underpinning the reputation and identity of PGI 'Vin des Allobroges. " 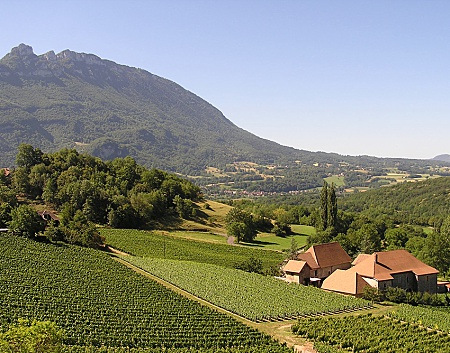