In the Middle Ages, only quality vineyards giving wines a delicate taste remain. The monks retained almost exclusively on the winery until the eighteenth century.

The vineyards of Ain flourished between 1830 and 1870 with an area exceeding 20,000 hectares. A survey conducted by the government in 1868 notes that the vine represents 25% of the agricultural product of the department.

Since then, the vineyard of Ain is implanted on hillsides, on sites which are recognized and identified in the survey cited above. The wines produced in the Pays de Gex, Revermont, the Val de Saône and Valromey are an important part of the production of wines of Ain identified by consumers.

The vineyards of Ain is well established on the most favorable sites, often on hillside along rivers or Lake Geneva, northeast of the geographical area of ​​production, providing a vineyard blocks.

In these blocks, winemakers have used various grape varieties by searching the best match between the terrain, climatic constraints, and the cultural and physiological characteristics of these varieties. Thus vineyards in"hautins" or "hutins were introduced in the fifteenth century : vine seedlings are planted around a tree to which the branches hang, thus escaping the harsh climate and enabling a significant space saving. This method of conduct has almost disappeared today, afer the phylloxera crisis.

Located between the wine influences of Jura, Switzerland, Savoy, Beaujolais and Burgundy, the vineyards of the Coteaux de l'Ain borrowed from its neighbors grape varieties that have found soils of expression on its hillsides such as Chasselas, Chardonnay, Aligoté and Gamay, which were added to the more local grape varieties list.

The diversity of adaptation of these grape varieties can be found in the variety of products offered by the IGP "Coteaux de l'Ain".

The production is mainly focused on white dry wines and red wines.

White still wines are grown to get the right balance between freshness, minerality and a typical aroma of the variety. The wines are sometimes slightly beading. Freshness is found in rosé wines, with aromatic red berry fruit, the profile varies according to the grape varieties used.

The red wines are light, low in tannins, easy and pleasant to drink in their youth.
Quality sparkling wines, white or rosé, have a fine foam. The aromatic characteristics depend on the variety, but are generally of floral type and recalling white flesh fruits.
Sparkling wines of red quality have often aromatic notes with red berries aromas.
These wines are usually presented to the consumer with the mention of the grape variety.

This range of products, clearly identified by consumers, enhances the reputation of the wines of the IGP "Coteaux de l'Ain". This first local and regional rather tends to spread today, developed and driven by the enthusiasm of the IGP operators involved in the geographically recognized denominations. These elements contribute to the specificity of the wines of the Ain whose average production is about 550 Hl.

By their vineyard restructuring actions, the producers of the IGP winemakers "Coteaux de l'Ain" contribute in the characterization of the landscape of their territory and thus contribute to the development of the reputation of their products. 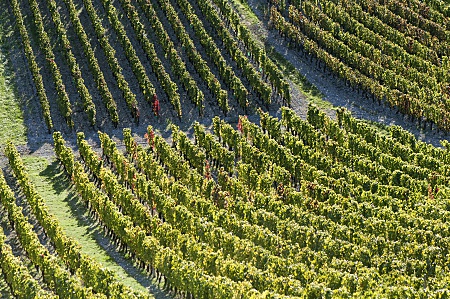